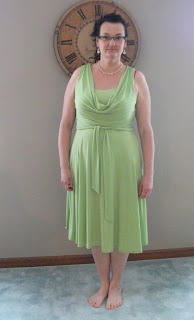 So, today I began my rapid fat loss plan

.  So far it hasn't been that bad.  I was getting a little nervous because it's very restrictive but I survived thus far.

Here is my before pic in the lime green dress.  I promise to wear shoes to the church.


For breakfast I had egg whites scrambled with tomatoes, peppers and onions and topped with a little cheese (fat free).  I also stirred in some salsa for extra flavor.  I didn't take pics of that, because everyone knows what scrambled eggs look like.

For lunch, I had Mexican chicken topped with salsa and steamed yellow beans with Mrs. Dash. Very good, and I felt satisfied. 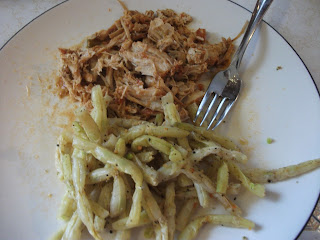 For a snack this afternoon I had some sliced cucumber.
For supper, the kids are having homemade pizza.  Not the easiest thing to be around but I've come up with a solution.  I sliced a cooked chicken breast thinly and horizontally and topped it like a pizza.  It got me through smelling the yummy homemade pizza crust and was actually quite tasty.

I'm going to start cooking dinner a little bit late so I can get through the night without dying of starvation.

I caught myself making excuses recently, which isn't like me.

I'm just going to wait until I'm not spending the day babysitting at my friend's house every day.
I've been using that as an excuse to eat junk this week.  My best friend had major surgery this week, and she has a newborn and an 18 month old, so obviously, help is needed.  People brought over food and I said to myself I was obligated to eat it to be polite.  Please.  I wanted to eat it because it looked good. So today, I packed my cooler, as though I was going to work.  I took everything I need to keep me on track today: lunch, water and a snack.  Excuse busted.

I'll just keep doing what I've been doing a little longer - it's bound to work eventually.  Really?  It's been five months, and it hasn't worked, so why did I magically think it would suddenly just start working? Magic? I need to make a change. I've waited five months.  That is long enough. Excuse busted.

I'll wait until after my period.  That's ten more days.  Do I want ten days of results under my belt or ten days of waiting. Excuse busted.

I'm making homemade pizza tomorrow for the kids - I'll start after that.  Suck it up woman, you are on a diet.  For two weeks you can live without pizza.  I could come up with something wonderful I want to eat everyday and put this off until Kingdom come.  Excuse busted.


The time for excuses is over.  Now, it's time for action and a change.

I'll be back tomorrow with the results of day two.

Posted by Daisygirl at 1:18 PM

Some of my favorite inspiring places to visit online....